“We have a mission statement posted in the lobby, but who knows what our vision is now.” 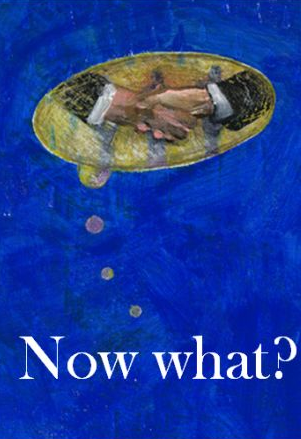 Ernest Auerbach knows his way around the corporate world, including the carnage that often follows after a merger. As a corporate general manager with a global portfolio of senior positions from Xerox and CIGNA to New York Life and AIG, he has seen the ugly when, in his vivid words, “mergers trumpeted as made in heaven end up in hell.”

He warns that mergers sometimes fail because the hard work isn’t done after the announcement confetti is swept up and everyone files back to their office (or collects their severance check).

Let me add two cents from the brand corner of the room.

I’ve made good money off of troubled mergers, aiding worried executive teams trying to figure out how to wrangle their company culture and their external brand in the weeks and months after a merger. You only have to think about the nature of a good brand to understand why.

Consider five simple points about what a brand position should be:

Can you think of anything about a merger that will mess with the karma of this simple list? Yeah, just about everything. Strategy, customers, company culture, market position…it’s all up for grabs and the politically charged air that fills the corridors after a merger makes it very difficult for executives and staff to talk calmly, honestly and without fear about these critical issues.

“We have a mission statement posted in the lobby, but who knows what our vision is now.”

It isn’t laziness or poor management that leads to much of this stress. Post-merger executive teams are flying full speed ahead, with a good deal of flex in their moment-to-moment priorities, demands, and understanding of what is required to keep the new company from rolling off the end of the table after a merger.

A simple exercise to gain agreement on the brand.

In this environment, a clear-headed and objective brand discussion can often serve as a catharsis. The process of getting everyone’s brand thinking in alignment forces a newly merged executive team to come to terms with issues that have been simmering just below the surface. A skilled facilitator can get the ball rolling, gently forcing the team to recognize and openly discuss unaddressed disagreements about customer segments, product strategies, pricing, etc. Is our company a Ferrari or a Chevy Impala?

Frankly, these discussions can be painful, but then again a slow rot causing limbs to fall off isn’t much fun either, and that’s what often results from ignoring fundamental questions of post-merger brand coherence.

Gaining clarity early after a merger is bound to pay dividends for the new organization, and may salvage a few careers in the process.

I’ll never forget the newly minted company president in Houston who called me into his office to relate how instrumental our branding process had been, then saying, “Because of it, I’ve decided to resign. I’m not the right person to lead us where we need to go.”

My career began in television and eventually turned to advertising, marketing, and brand strategy. BA in Communications from Brigham Young University, and an MBA from The University of Texas at Austin. "Be true to your brand." LinkedIn Profile: https://www.linkedin.com/in/dwenger/ View all posts by David Wenger